Katherine Kerswell, the new CEO of Croydon Council wrote “Joining Croydon as interim chief executive means I also have a responsibility for getting to the bottom of what went wrong and a personal accountability for making it right, and I really am so sorry that we are in this situation. I can see the worry that it’s causing and the strain it is putting on you – as professionals and on a more personal level, which just isn’t fair.” 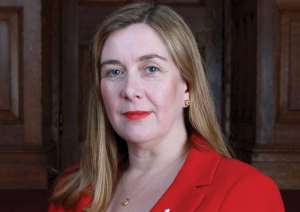 The appointment of Katherine Kerswell was in part brokered by the Local Government Association, and according to Katherine the LGA are providing “a package of support” which includes the appointment of Elaine Jackson, who until last week had been the acting chief exec at Tandridge. (pictured below)

Katherine told staff in a round robin “Elaine has joined us to help with our improvement plan, the action plan in response to the public interest report and look at how we’re structured as an organisation – work that we’ll make sure is shared with you all,”

According to Katherine Kerswell, many staff “are angry, upset and want answers on why this was able to happen”.

As a result she needs to stamp authority over the Executive Leadership Team. A number statements have been made by some executive directors as a result of the publication of the audit report.

Shifa Mustafa, the executive director of “Place” wrote “I am truly sorry for the situation we are now in and in particular the impact it will inevitably have on all our staff and residents,” She has been in charge of such mismanaged multi-million-pound projects as Brick by Brick and Fairfield Halls, and whose department got a particularly fierce kicking in the audit report. She remains in her £180,000 per year job, for now at least.

Jacqueline Harris-Baker, executive director of Resources and borough solicitor quoted “the report covers a long and well documented history of poor financial management and governance across the council and of various company entities.” She quotes “What’s important for me now, is how we are going to move forward, learn our lessons and work with Katherine and members to take action to implement change.”

Hazel Simmonds, another executive director, also issued an apology “As part of a corporate team, I should have challenged more, I should have tried harder for Croydon and all of you. Please accept my apology and note that I will work hard with all of you to be part of the solution.”

Time and again, Grant Thornton’s report had highlighted the lack of “challenge” among senior staff and from elected councillors, as the organisation continued implementing costly policies long after it had been clear that they were failing. What the auditors called “corporate blindness”.

Lisa Taylor,  who has been director of Finance Investment and Risk who has been in this position since January 2019, after her former boss, Richard Simpson, had walked out of his job as exec director for finance. His abrupt departure has never been explained. According to auditors Grant Thornton, too much emphasis has been placed of late on the risk bit.She states “What is most important for me right now is that we work quickly together to implement the recommendations and put Croydon back on a stable financial and operational footing for the future.”

Katherine Kerswell added, “All of the leadership team are committed to their role… which means everyone accepting and owning our collective and individual corporate responsibility.”

According to Katherine, the MHHCLG’s task force (Ministry of Housing, Communities and Local Government) under Chris Wood, are already conducting their “rapid review”, announced by Tory minister Robert Jenrick yesterday.

“This review is to give assurance to the government that we understand our situation, that we are not in denial and that we are doing everything possible to sort this out.” Hamida Ali, the new leader of the council “… and I have been very clear that we see this as a very positive step from MHCLG as the more assurance they have on our situation.”

The report makes a number of recommendations for the council to address and the full report can be access though this link:

The council will be holding an Extraordinary Council meeting on Thursday 19th November 2020 at 6.30pm to discuss the report.  The meeting will be held remotely.